The early surveyors of the property purchased for the N.C. National Forest had strict guidelines for the marking of property corners. Aside from the actual corner itself, they were required to document the location of nearby witness trees in case the original property corner was obliterated. These photos show samples of where we investigated the markings left behind to prove that the trees we found were the the actual witness trees referenced in the old U.S. Forest Service survey notes.

Looking at the outside of the tree, there may have been only a small scar where we felt the old blaze was originally made, not enough to prove it was the original witness. We were looking for tree scribing made in the early 1900’s. We cut out a portion of the tree trying to get back to the time the original work would have been done so that we could find the hidden evidence.

Photos A5, A6 & A7 are related. We were working on a boundary that had been neglected for several decades and were trying to find some evidence of the original survey. We finally found this Chestnut Oak along our survey line that had a few old scars that looked man-made. We cut into the tree and found what we were hoping for. Photo A5 was what we first saw after carving out a sample. A little closer look in Photo A6 revealed the red paint we were looking for.

A1 – The large cut through the numbers is from our power saw.

A2 – This image shows the actual scribing made into the witness tree.

A5 – The actual blaze and painting of the tree

A6 – Enlargement of Photo A5 with red paint still visible.

A8 – Scars visible on Maple

Smoky Mountain Land Surveying is a member of these professional organizations: 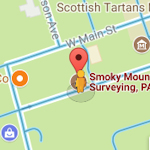 We use cookies to ensure that we give you the best experience on our website. If you continue to use this site we will assume that you are happy with it.I understand